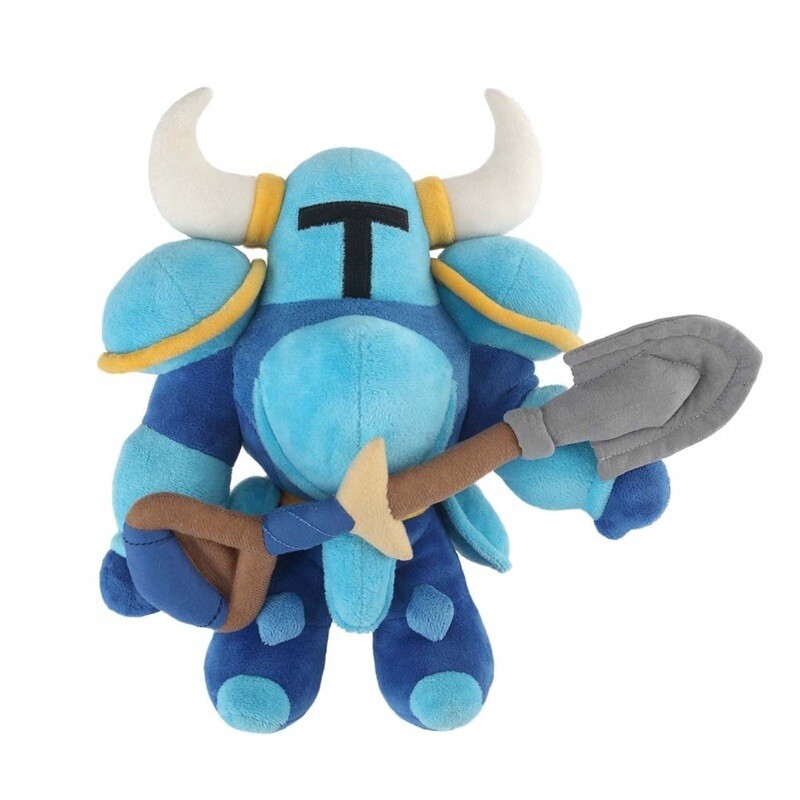 Shovel Knight plush is 12 inches tall and made with high quality soft minky fabric. Ages 4 and up. Run size of 400 units worldwide. Officially licensed from Yacht Club Games. Enamel Pin and Golden in game skin code for use in Rivals of Aether Game (not shown) included.

Character: A practitioner of the ancient code of Shovelry, Shovel Knight can do almost anything with his signature weapon, the Shovel Blade. His ingenuity and quick thinking have won him many battles, even though his stature is small! Always honest and helpful, Shovel Knight lives by the creed of Shovelry: Slash Mercilessly and Dig Tirelessly!

Shovel Knight: Treasure Trove is the full and complete edition of Shovel Knight, a sweeping classic action adventure game series with awesome gameplay, memorable characters, and an 8-bit retro aesthetic! Become Shovel Knight, wielder of the Shovel Blade, as he runs, jumps, and battles in a quest for his lost beloved. Take down the nefarious knights of the Order of No Quarter and their menacing leader, The Enchantress. But that’s not everything! Shovel Knight: Treasure Trove also features three additional campaigns that are games all unto themselves! Take control of Plague Knight, Specter Knight, and King Knight on adventures of their own! Together, they form a grand and sweeping saga! With a fully cooperative campaign, a full-featured challenge mode, a 4 player battle mode, and body swap mode, you’ll be digging for a long time. With Shovel Knight: Treasure Trove, you get it all. Uphold the virtues of Shovelry, earn relics and riches, and discover the true meaning of shovel justice!

To learn more about Shovel Knight, head on over to: